Why is newspaper readability important? 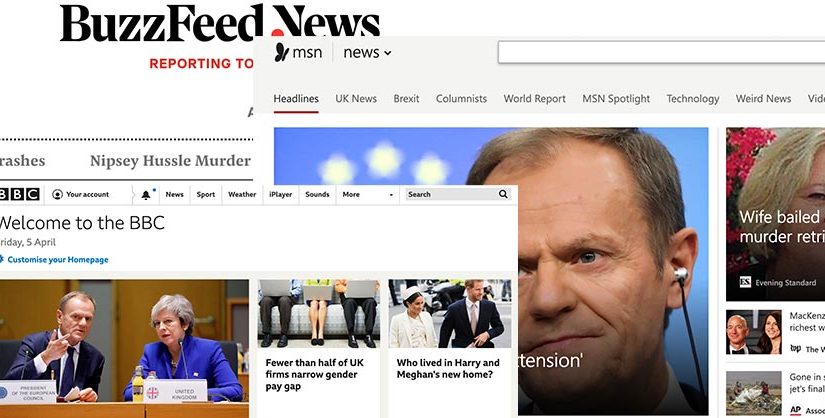 Newspapers remain a cornerstone of journalism. They’re still read by many, especially online. But, which news outlets are writing the most readable online content, and why is it important that they do?

What does it mean for a newspaper to be readable?

Over the decades, newspaper publishers have had to weather some significant storms to maintain their circulation. Readability has been used increasingly to ensure they attract a wide audience.
Papers streamlined their message in order to communicate efficiently and effectively.

As readership shifts from print to online, it’s more important than ever that newspapers adapt to online reading habits.

After all, access to journalism is not to be taken lightly - journalism is considered a protector of democracy in society. It has a role in changing policies, it’s a record-keeper of history and holds key authorities accountable.

It’s also an authority in itself — in a world saturated with fake news, journalism acts as an authoritative voice to cut through the noise.

To deliver this authoritative message clearly and concisely, an online newspaper must reflect the reading grade of the general public.

What readability grade do newspapers aim for?

In the past, newspapers were much less readable than they are today.

Thanks to the work of readability experts, tough prose became digestible, scannable content for the average person. Newspaper journalism became more focused on the reader and less on the writer.

Two readability experts, Flesch and Gunning, worked extensively with newspapers to help them improve their readability.

Even by improving readability by a small amount, newspapers greatly increased their circulation.

One study showed that the total number of paragraphs read increased by 93% when readability was improved.

They improved newspaper readability by an impressive five grades.

Before the 1940s, the majority of large-circulation newspapers could only be understood by college graduates.

After these studies, newspapers could be understood by a reader with a reading level equivalent to Junior High.

The readability grade the newspapers aimed for remained at 11 following this. But, considering the impact of social media on our attention spans, many are now aiming for a lower grade.

“A Flesch axiom—"Write as you talk"— is now widely accepted by newspapermen [...] newspaper readers or radio listeners have a better chance of grasping the news, or what it means, if it is told to them simply and clearly.”

Which online news outlets have the best readability?

Newspapers should evolve with changes in reader habits and write in a way their readers can understand.

When writing for the general public, we recommend aiming for a Flesch Kincaid grade level of 8-10.

This is because readers look more and more to the web for their news content and view it on desktop, tablet and mobile. Scannability of newspaper copy is more important than ever.

Here’s an overall guide to where several news outlets fall on the Flesch-Kincaid scale. The higher the grade, the more difficult the website is to read. 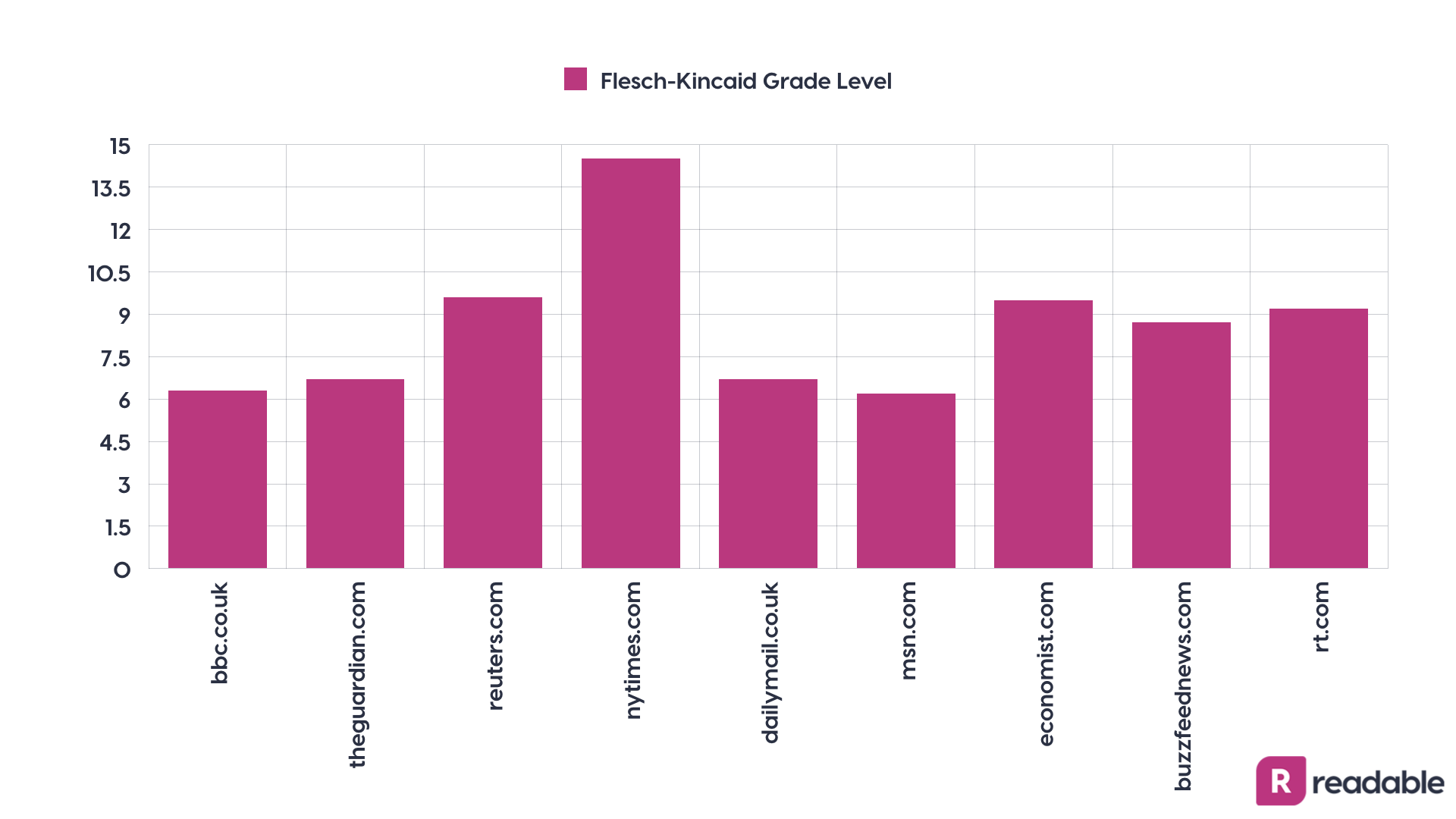 The news outlet which stands out as being the least readable — having the highest Flesch-Kincaid grade level — is the New York Times.

This doesn’t mean the writing is qualitatively bad. But, it supports their demographic information. They represent an affluent audience and their writing style is several reading grades above the general public reading level.

In fact, their reading grade — 14.5 — indicates the reader would have to be in college to understand their articles.

Their insightful content is lost on the average person. They could reach a much wider audience with their stories even with a small increase in readability.

Let’s have a look at some of the most readable of the selection, having a Flesch-Kincaid grade level below 9.

The great advantage of news outlets that don’t have their roots in print is that they know the reality of writing for the web inside-out. They know that if the content isn’t readable, the viewer can just click away.

Remember back in around 2012 when Buzzfeed was just listicles like 25 Most Awkward Cat Sleeping Positions? Now it’s a news institution. 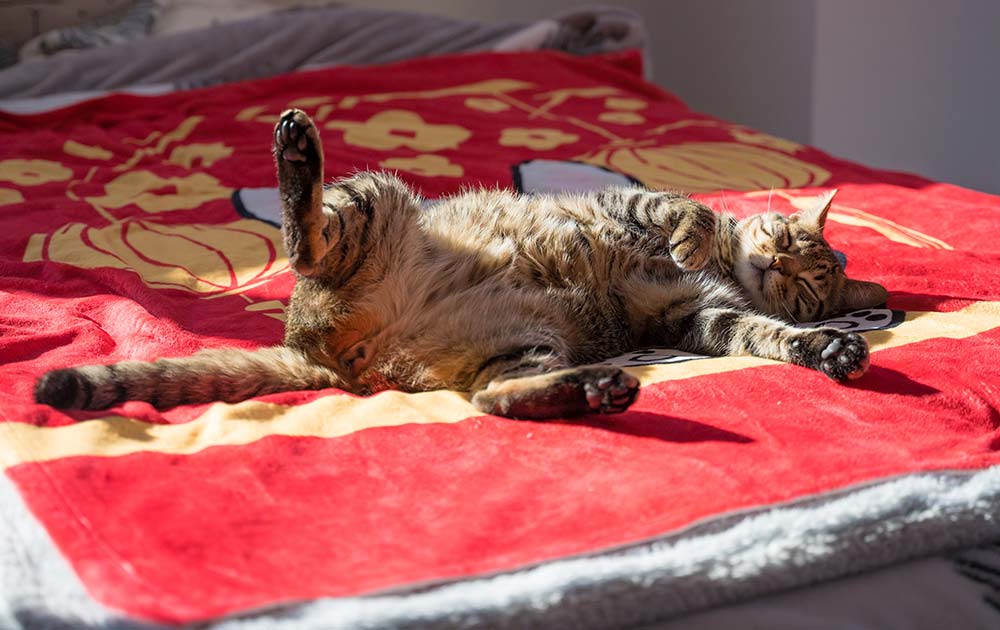 With an overall Flesch-Kincaid level of just 8.7, they are certainly aware of the importance of readability.

For visual readability, they use short paragraphs to break up the text, making it easily digestible.

They also know that images make their stories look more visually friendly for the reader.

They know that mixing it up has the best impact.

Whether we like it or not, MailOnline remains one of the most popular news websites in the world.

Their articles are very easy to scan, not least because of their use of bullet points to sum up each release.

With a Flesch-Kincaid level of 6.7, they maintain a level of readability less readable outlets could learn from.

They have a very low percentage of adverbs, use mostly short words and over half of their content consists of nouns.

These are all features which make their articles a breeze to read and undoubtedly why their site is so popular worldwide.

BBC is one of the best examples of good readability. They have a Flesch-Kincaid grade level of just 6.3.

In their articles, they usually limit their ideas to one per paragraph, which make them easy to scan and digest.

They use subheadings with questions the average reader would likely be asking about the story which gives their articles a logical structure and helps to break the information down.

As an institution which emphasizes its trustworthiness, its tone errs on the formal side, but its sentiment is positive in our analysis across the board, which helps to make even more difficult topics readable.

The evolution of news production is an opportunity for all writers to learn. The media has evolved and must continue to evolve with consumer habits for us to continue to have an engaged, informed public.

Take inspiration from the newspapers who are adapting to a changing cultural landscape.

Try a free readability test today to see if your writing is serving the reader.