The science of swearing 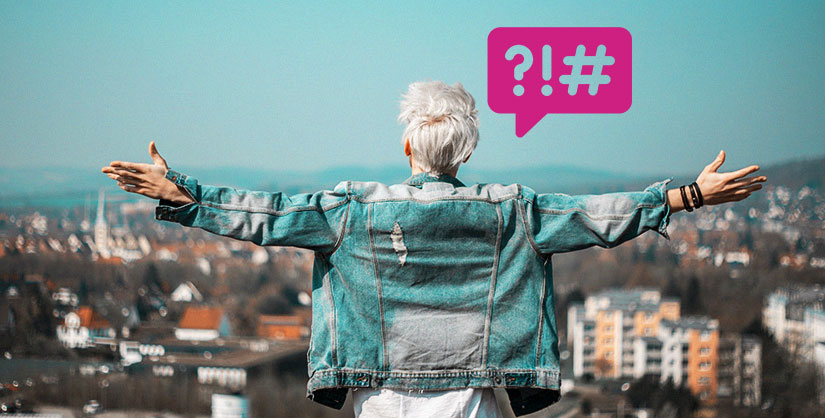 Until relatively recently, it has been believed that swearing worsens, rather than improves, a situation. More recently, this view has been challenged. We’ll outline some of the science behind swearing. Read until the end to find out how cursing could actually be good for you.

Why do we swear?

“Under certain circumstances, profanity provides a relief denied even to prayer.” — Mark Twain

Because swearing varies in context, the reasons we swear are complex. Here are just a few reasons why we swear:

There is something exhilarating about breaking the rules. Because swear words are often related to taboos, when we swear we’re breaking those taboos for the sake of breaking them. The objective here, in swearing for swearing’s sake, can be to be offensive, or not.

Sometimes we just want to give our sentences that extra “oomph”. As John-Erik Jordan points out: “Swear words add emotion and urgency to otherwise neutral sentences.”

This can be an incredible writing device. It can actually make dialogue a little more realistic. Your character might be perfectly verbose - but why would they use some boring adverb where a curse word would do the trick? People are driven by emotion. If you step on a piece of Lego and you feel pain and anger, realistically you’re probably going to swear.

Someone who infamously loves to use profanity in his dialogue is Quentin Tarantino. Someone even counted every single swear word used in his movies. Both fans and people not so keen on his style would probably equally concede that his dialogue is fucking memorable.

Contrary to centuries of puritanical views on cursing, swear words are becoming increasingly recognised as positive tools. (No pun intended.) As Timothy Jay and Kristin Janschewitz put it in their study:

“Swear words can achieve a number of outcomes, as when used positively for joking or storytelling, stress management, fitting in with the crowd, or as a substitute for physical aggression.”

Kay and Janschewitz mentioned ‘fitting in with the crowd’. Well, amongst groups of friends, swearing can be used in bonding ways. It’s a sign that friends are really comfortable with each other and in that case, they can call each other all sorts of things as terms of endearment. 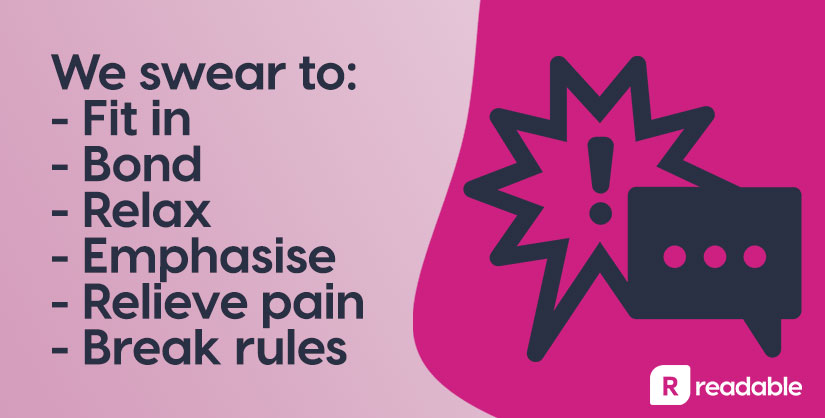 What profanities are the most offensive?

As outlined, profanity can be a positive device. It helps us to let off steam, place emphasis on something or create a relaxed atmosphere. This isn’t to be confused with slurs.

Benjamin K Bergen, in his book What the F, details a UK survey on what words should be banned from daytime TV. The words considered the most profane are slurs - not swear words. For example, the ‘n’ word was at the top of the list.

Sexual words - where most of us Brits’ swear words come from - were considered comparatively less taboo.

This is because slurs are rooted in centuries of harmful prejudice. In the UK, we consider these instances of verbal abuse to be hate crimes. They centre on a person’s disability, race, religion, sexual orientation or transgender identity - these are called ‘protected characteristics’.

Most of us couldn’t really care less if our Prime Minister said the “f” word, but we do care about statements we don’t want to repeat on this blog.

This is where Readable’s profanity detector comes in. We acknowledge that if you’re doing professional writing, you probably don’t want to swear. But we don’t stop there. We have broadened our detector to pick out words and phrases which may be offensive. In fact, we’ve been focusing on our profanity detector in recent months. Our community manager Lindsay has been having a whale of a time handling our profane data to feed into development.

What makes a swear word stick?

Ever wondered why certain swear words are more common than others? Why they permeate multiple cultures and stand the test of time?

The swear words which have the most impact seem to date back the furthest. For example, the word ‘fuck’ dates back to 1568, whilst the ever-potent ‘cunt’ dates back to 1325.

This is partly due to how abrasive they are to say. As Benjamin K Bergen points out, “syllables of profane words tend to be closed.” Further, 95% of our profane monosyllabic words are closed syllables. Here’s a great passage where he explores how swear words are adapted for fiction:

“When English-speaking fantasy and science fiction writers invent new profanity in imaginary languages, what do those words sound like? Battlestar Galactica has frak (“fuck”). Farscape has frell (also “fuck”). Mork & Mindy had shazbot (a generic expletive). Dothraki, the invented language in HBO’s Game of Thrones, has govak (“fucker”) and graddakh (“shit”). Not all are monosyllabic, but they all end with closed syllables.”

95% of our profane monosyllabic words are closed syllables.

Are we the only species which swears?

The short answer is “no”, but there is a fascinating study behind this. The study was called Project Washoe, which was initially to toilet train chimps via sign language. Here’s an excerpt from the study:

“In Project Washoe, the sign for “dirty” was bringing the knuckles up to the underside of the chin. And what happened spontaneously, without the scientists teaching them, was that the chimps started to use the sign for “dirty” in exactly the same way as we use our own excremental swear words.”

Mindblowingly, the chimps were reappropriating the sign in a profane way without instruction. The study just gets more fascinating from there. The chimps actually passed down the sign language to their offspring. Furthermore, they started to combine the sign for “dirty” with nouns to create insults for each other - for example, “dirty monkey”.

It is easy to assume that people who swear a lot don’t have a large vocabulary. Indeed, you can always find a more interesting word for something rather than falling back on a curse - but, it turns out this assumption about vocabulary is false.

In a study on the benefits of swearing:

People who have an extensive toolkit of curses tend to be verbose and intelligent. Other studies have found that people who swear a lot can be more honest, as well as being more creative.

Curse words are stored in the limbic system in the right side of the brain. This is a complex system of emotions and drives and is associated with creativity. So next time you think someone who swears like a sailor should “be a little more creative”, think again.

People who have an extensive toolkit of curses tend to be verbose and intelligent.

Previously, it has been thought that swearing exacerbates situations due to a thing called “catastrophising”. However, recent research has challenged this view.

Amazingly, swearing can reduce our perception of pain. In Emma Byrne’s book Swearing is Good For You, she details a study on this. The study involved testing plunging one’s hands in ice water and using swear words vs using non-cursing alternatives:

So maybe the Lego example used earlier is not only cathartic but pain-relieving, too. Like anything else, there’s a time and a place for swearing. Being mindful of the context will help you use it in a positive way. Want to add some outdated curses to your vocabulary? Check out our blog post on how to swear like the old days.

The joy of English     language     swearing