Examples of wordy sentences – and how to correct wordiness 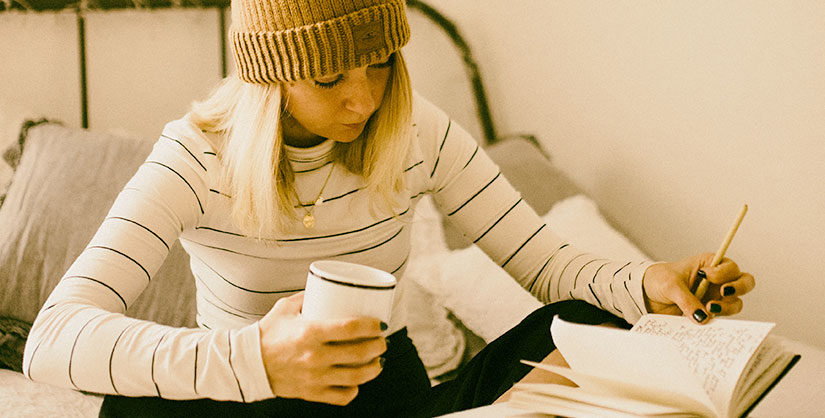 Sentences which are too long and wordy decrease the readability of your content. What are some examples of difficult sentences and how do you go about fixing them?

What does it mean to be too wordy?

“Wait a minute,” you might be thinking, “isn’t it a good thing to display a good vocabulary?” And you’d have a point. As word nerds, we agree to an extent. It’s a great thing to use words sometimes that aren’t in the everyday conversation. Our language is full of rich and beautiful words and phrases which can make an ordinary sentence extraordinary. Up to a certain point, it's good to be wordy.

This doesn’t mean there’s not a line to be drawn. There’s a difference between showing creativity and merely trying to stuff your writing with synonyms to look impressive. And chances are if you’re doing the latter, it’s obvious to your reader. This is the opposite of plain language and conciseness, and there’s a word for it - verbosity. 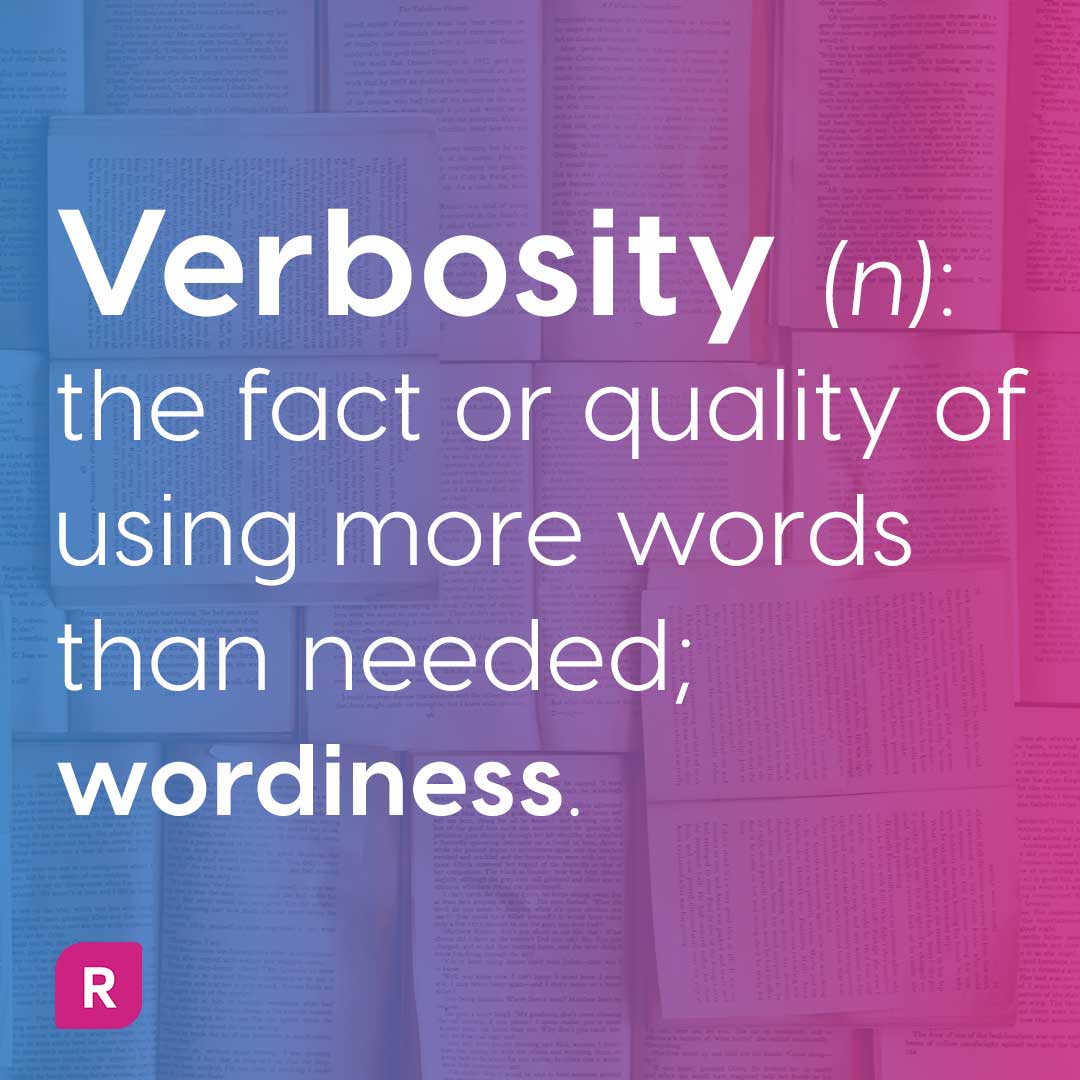 Let’s look at some examples of this fatal flaw in writing and consider a more no-nonsense alternative.

Essays are particularly prone to wordiness. Here’s a passage sourced from San Jose State University on the topic of pruning prose. They used the below as an example of wordiness:

There is currently a lively, ongoing controversy among many sociologists and other professionals who study human nature : theories are being spun and arguments are being conducted among them about what it means that so many young people—and older people, for that matter—who live in our society today are so very interested in stories about zombies.

According to Readable’s new ‘reach’ metric, this is only easily readable by 25% of the general public.

Not only is this paragraph one really long sentence - but it’s also self-indulgent in using more words than are needed to make the point. It also uses unnecessary qualifiers (so very) where a stronger adjective would do the trick.

This is how I would reword it:

A lively societal debate rages among the human sciences. The contentious issue is: why are so many people fascinated by zombie fiction?

The reach has shot up dramatically to 80% of the general public. Huzzah! Among other tweaks, I’ve replaced ‘so very interested’ with ‘fascinated’. Using too many adverbs can slow your writing down, whereas using a stronger adjective instead keeps your writing dynamic.

A redundant expression is another type of wordy expression and it means you’re saying the same thing twice to fill space.

For example, if you reference an ‘empty void’, you’re using a redundant expression, or ‘doublespeak’. A void is by its definition empty.

The synonymous or related words aren’t always right next to each other in redundant expressions. Here’s an example of a paragraph full of doublespeak:

She opened the envelope, which contained a confidential document inside. After reading it with close scrutiny, she discovered it was written in the exact same handwriting as the mysterious note she’d received before; the reason she knew this was because of handwriting studies in her past history.

I’ve bolded the repetitions in the sentences phrases which make them superfluous and too wordy. Here’s the corrected version:

She opened the envelope, which contained a confidential document. After reading it with scrutiny, she discovered it was written in the same handwriting as the mysterious note she’d received before; she knew this because of handwriting studies in her past.

All you have to do is identify where you’re using two synonymous words where one would do.

You’ll recognize the passive voice from any document you’ve ever read which tries to shift responsibility from the party in question and put a distance between themselves and the action.

It refuses to get to the point and doesn’t add clarity to the situation it’s describing - sometimes this is deliberate, and sometimes it’s a misguided attempt to sound more intellectual.

Monzo is a great example of a company who are actively making an effort to clarify their terms and conditions for their customers. Instead of saying, “a refund will be given to you”, they say “we’ll give you a refund” as part of their tone guidelines.

By writing in the active voice in their terms and conditions, they give a strong and trustworthy impression.

Here’s a quick guide to active versus passive voice: 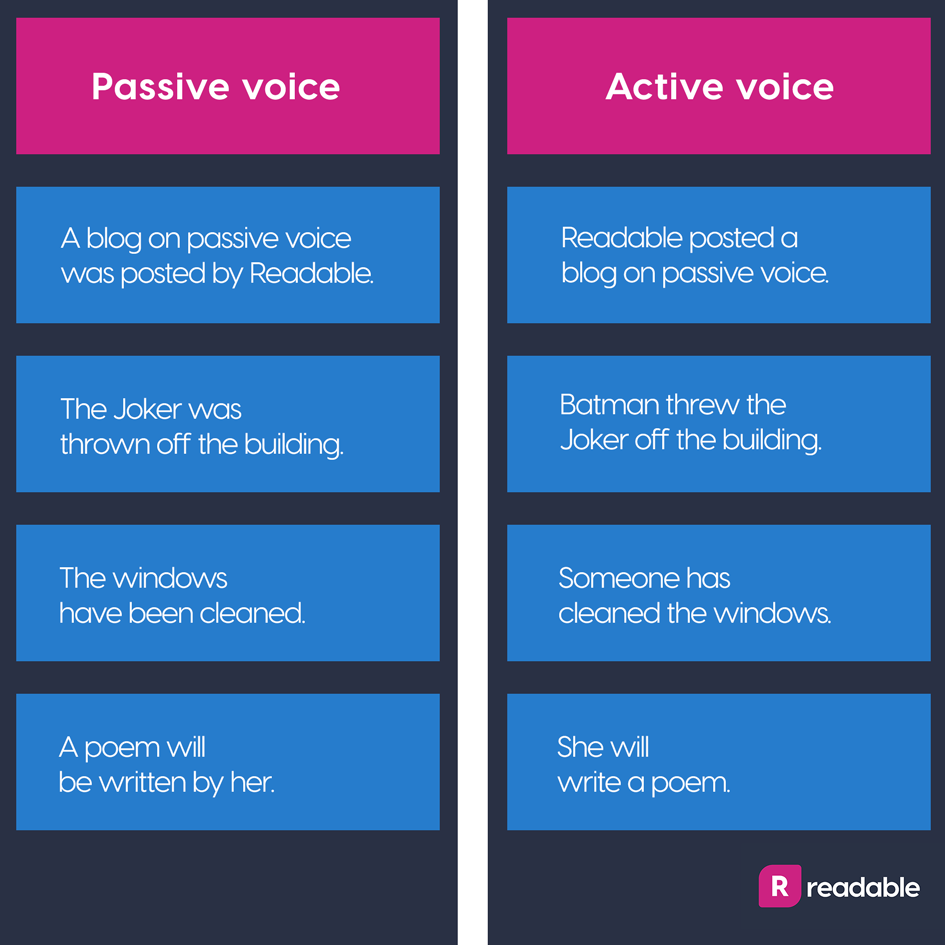 Go forth and edit!

Don’t forget that clarifying your content and cutting out the fluff isn’t about dumbing down your content. It’s about opening it up. Got a question about how to improve readability? Let us know in the comments or get in touch.