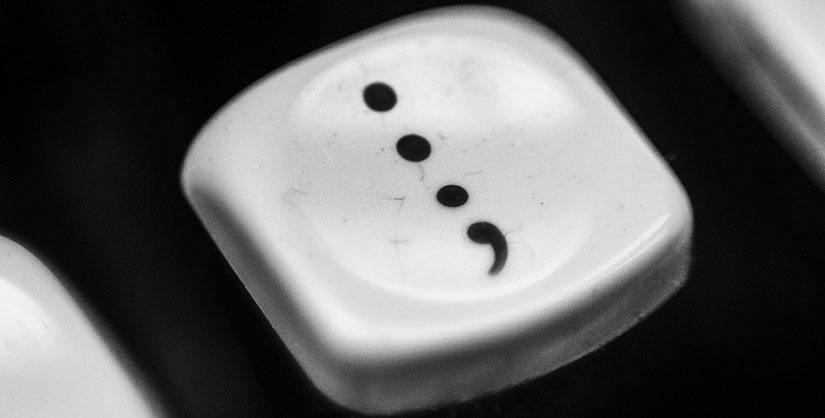 The semicolon is a commonly misunderstood punctuation mark. Some are intimidated to use one for fear of using it incorrectly. We’ll break down its purpose, appropriateness and how to best use it.

What is a semicolon?

Semicolons, like commas, suggest a pause — longer than the one of a comma, but short of that of a full stop.

When can I use a semicolon?

You can use a semicolon when you want to link two independent clauses together which are closely related.

These sentences both function independently, but they are linked. So it would be perfectly appropriate to use a semicolon, like this:

Notice I have used the lowercase to begin the second clause - this is because it’s part of the same sentence, so it shouldn’t be capitalised unless it’s a proper noun. Follow the same rules as you would following a comma in this regard.

What are some famous examples of the semicolon?

To see the semicolon in action, take a look at these examples:

Semicolons are similar to colons but are not the same. The two punctuation marks are often confused, by the general public and grammarians alike. The question of their appropriateness for certain contexts is often disputed. A colon is more often used to introduce a list. For example:

Notice that the first clause doesn’t make sense on its own, which is why a colon is used. It also precedes a list, which is usually when colons are used.

Without the words ‘the following’, a colon wouldn’t be needed for the above sentence and a comma would be more appropriate.

Semicolons can also be used in lists, but in a different way. They tend to be used as separators in this instance, in list items already containing commas. For example:

In the second sentence, the clause after the comma adds detail to the preceding clause. The semicolon separates it from the following clauses, which follow the same structure.

Choose a comma after the first independent clause while connecting two separate clauses to one of the following coordinating conjunctions: but, for, and, nor, or, yet, so. Take the following examples:

Commas are more appropriate in these examples because they precede a connective.

It depends on how you’re using semicolons. In and of themselves, they shouldn’t be demonised as such. They can be a really useful tool to break up a sentence where one thought naturally progresses for another. However, they can facilitate lengthy sentences, which do decrease readability. Used unnecessarily, they can also make your writing look cluttered - which is the opposite of how they should be used.

We would encourage you to use a semicolon or two in your writing. Just make sure you use them judiciously and not in excess. Don’t forget to refer to the distinctions made above to make sure you’re using it correctly. If in doubt, simply end the sentence with a full stop and start another. Two short sentences will always be better than poorly placed punctuation.