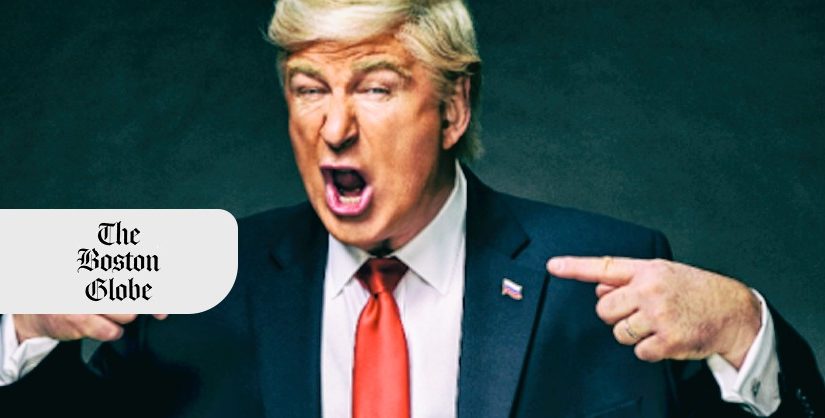 When Donald Trump announced his presidential campaign, he decried the lack of intelligence of elected officials in characteristically blunt terms.

The Globe reviewed the language used by 19 presidential candidates, Democrats and Republicans, in speeches announcing their campaigns for the 2016 presidential election. The review, using a common algorithm called the Flesch-Kincaid readability test that crunches word choice and sentence structure and spits out grade-level rankings, produced some striking results.

The Republican candidates — like Trump — who are speaking at a level easily understood by people at the lower end of the education spectrum are outperforming their highfalutin opponents in the polls. Simpler language resonates with a broader swath of voters in an era of 140-character Twitter tweets and 10-second television sound bites, say specialists on political speech.

“There’s no time to explain in modern politics,’’ said Elvin T. Lim, a professor at Wesleyan University in Middletown, Conn.

Mike Huckabee and Jim Gilmore, who are struggling in the polls, are both spinning sentences above a 10th-grade level, according to the algorithm. Ben Carson, who has surged and maintained a second-place standing in the polls, communicates with voters at a sixth-grade level — despite a medical degree and career as a brain surgeon. 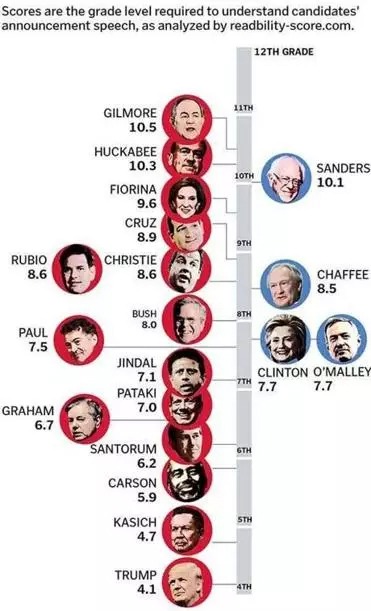 By every criteria in the algorithm, Trump is speaking at the lowest level. He used fewer characters per word in his announcement speech, fewer syllables per word, and his sentences were shorter than all other candidates.

His vocabulary is filled with words like “huge,” “terrible,” “beautiful.” He speaks in punchy bursts that lack nuance. It’s all easily grasped, whether it’s his campaign theme (“Make America Great Again”), words about his wealth (“I’m really rich”), or his disparagement of the Washington culture (“Politicians are all talk, no action”).

He dismisses his opponents with snippy sound bites that, if polls are to be believed, have been devastatingly effective — such as when he labeled Jeb Bush “low-energy.”

“Trump is talking about things that are emotional, simple, and angry,” said Rick Wilson, a Florida-based Republican consultant. “He’s not talking about the complexity of international affairs. It’s, ‘Let’s take their oil!’ It doesn’t have to be a long, drawn-out exegesis of American foreign policy. It’s Trump. It’s simple.”

The utterances of today’s candidates reflect a continued decline in the complexity of political speech. President George Washington’s “Farewell Address” in 1796 was written at graduate-degree levels: Grade 17.9 , while President Abraham Lincoln’s “Gettysburg Address” in 1863 was at an 11th-grade level.

A 2012 review by the Sunlight Foundation of nearly every statement on the House and Senate floors found that the grade level of speeches from members of Congress had declined, from 11.3 in 1996 to 10.6 in 2012. That review used the same algorithm.

Smart Politics, a nonpartisan site sponsored by the University of Minnesota Humphrey School of Public Affairs, examined presidential State of the Union addresses and found that scores had steadily declined. John F. Kennedy’s speech in 1961 was at a Grade 13.9 level, while President Obama’s have been aimed at an eighth-grade audience.

And for the record, the article you are reading now was written at a Grade 8.6 level.

“It doesn’t matter if you’re speaking to a Harvard intellectual or a Midwestern farmer or a motorcycle gang member,” said Paul J.J. Payack, president of Global Language Monitor, which analyzes trends and language. “Good communication is good communication. . . . ‘I’ve got a Dream,’ all those great speeches are nice, and direct. They use words people understand. They give a big message, but they’re not grandiose.”

The transcripts were put through the Flesch-Kincaid readability tests, which were developed by Rudolf Flesch in the 1940s and then modified in the 1970s for the US Navy.

“It’s not necessarily translatable to what makes a great speech,” said Eric Ostermeier, a University of Minnesota political professor who runs the Smart Politics site and has used the scores to test various candidates and presidents since 2009. “But it is a rough guide to compare the type of language, the sentence structure, the difficulty of the words.”

“I haven’t seen a fourth-grade one before,” he said of Trump. “But if he was speaking more like politicians, would he be doing as well in the polls? I don’t think so.”

For political consultants, it can be a battle to get candidates to speak like everyday Americans — and not like politicians.

“A leaders’ job isn’t to educate the public — it’s to inspire and persuade them,’’ Favreau said. “That requires meeting people where they are, and speaking in words that are easily accessible to the broadest possible audience. Perhaps the most powerful, inspirational political phrase of the last decade or so involved three of the simplest words in the English language: yes we can.’’

Chris Lehane, a longtime Democratic strategist, put it this way: “Once you start speaking like someone from Washington, D.C., for a voter it’s like you turn on AM when you mean to turn on FM. It’s just a different rhythm than what you’re looking for.’’

“In 2000, there’s a lot [of Democrats] who would poke fun at George W. Bush in terms of his speaking style and approach but didn’t appreciate that he was an effective communicator,” he added. “Because he was connecting with actual voters.”

Lim, the Wesleyan professor and author of “The Anti-Intellectual Presidency: The Decline of Presidential Rhetoric from George Washington to George W. Bush,” said the current media environment benefits those who speak in pithy sound bites.

“If you think about the tweet, the tweet is short,” he said. “The candidate who shows they can punch as much as they can in that short time form gets their message out.”

But is that a good thing?

“At some point enough is enough,’’ Lim said. “If you continue drawing these lines, you’re going to hit comic strip levels. . . . There are real costs to oversimplification.”