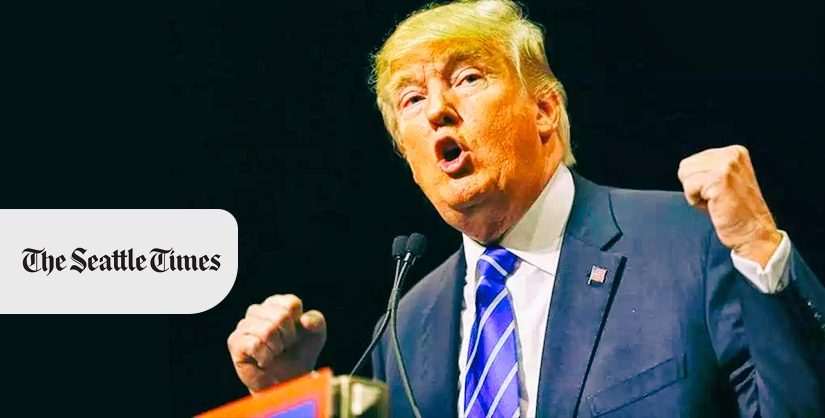 Danny Westneat @ seattletimes.com scores Donald Trumps speeches in the 2016 US election for readability.

Donald Trump is said to be tapping into some primal feelings among the electorate, such as fear. But his true genius appears to be speaking to America at the level of a fourth-grader.

Watching the last Republican presidential debate, I heard Donald Trump make just a howler of a statement. Everyone on the stage, the moderators especially, must have known it to be false. But nobody seemed to notice.

Here’s what he said:

Now anyone who has ever heard of Europe knows this to be ludicrous. It’s Republicans who are always warning what a catastrophe it would be for capitalism if we raised taxes to the level of, say, Sweden or Denmark. So everyone at the debate knew this was false. But it sailed on past.

Trump seems to have an almost childlike ability to say whatever he wants, unchallenged. How does he do it?

When I was looking up the transcript for the above quote, I noticed how simple Trump’s sentences are compared to his rivals. Look at the quote; the most complicated word in it is “economy.” Right before him, Ted Cruz used phrases like “unconstitutional executive actions” and “socialized rationing of care.” John Kasich used SAT words like “tenable” and “inviolate.” Both men also employed longer sentences, sometimes with multiple clauses on the way to conveying their points.

A few years ago a political science researcher examined the linguistic complexity of nearly 20 years of political speech in the U.S. Congress. He ran every speech given at the U.S. Capitol since 1996 through reading comprehension software and found that as a group, Congress speaks at roughly a 10th-grade language level(enter “sophomoric” jokes here).

This was a full grade level lower than in the mid-2000s, and entire university degrees less than the language the founding fathers used back in the day. (The U.S. Constitution is written at a 17.8-grade level, which is postgraduate complexity.)

Members of Congress defended themselves by arguing that concise language is preferable to purple prose, and also that the complexity of a sentence often has no relation to the value of its ideas (both true).

But the point here is that of 535 members of Congress, none spoke to the public with a linguistic sophistication lower than eighth-grade level.

I ran Donald Trump’s debate answers through the same program, called the Flesch-Kincaid Grade Level. It turns out the front-runner for the Republican nomination for president of the United States is speaking to us as a fourth-grader.

Most of his answers ranged from third-grade-level language to fifth, while his rivals tended to range between sixth grade and 10th. Cruz, formerly of the Harvard debate team, was by far the most advanced speaker, in terms of linguistic complexity anyway. In his closing statement for example, Cruz spoke at a 12th-grade level. While Trump closed out the debate using language a full six grade levels simpler.

Now debates are mostly extemporaneous. Even Abe Lincoln and Stephen Douglas, in their legendary debates of 1858, rebutted one another using the language of 10th-graders. Their hourlong prepared opening remarks, however, ranged from grade 14 to 20. (Douglas especially tended to speak at a doctorate level or higher.)

So I looked at some of Trump’s prepared speeches. Amazingly, the language of the hourlong speech he gave announcing his presidential campaign clocks in at a 4.1-grade level — about a year shy of graduating from elementary school.

I admit it, I’m stumped by Trump, just like most of the chattering classes. But after doing close readings of some of his speeches and debating points, I came away thinking he may be a special sort of communication genius.

Definitely he’s connecting with some voters at a primal level. With all the anxiety about how complicated modern life has become, maybe the key to unlocking a voter revolution was to go simpler than anyone has ever attempted before.

Others have suggested that Trump is a master at tapping into our inner fears. Maybe it’s really our inner child.

Steve Linney has been a marketer for the last twenty years, covering a diverse number of sectors. Including e-learning, the music industry, and corporate responsibility.