The Gunning Fog index is a commonly cited readability formula. Find out what the scores mean and how you can best use it.

What is a Gunning Fog Index readability score?

The Gunning Fog formula generates a grade level between 0 and 20. It estimates the education level required to understand the text.

A Gunning Fog score of 6 is easily readable for sixth-graders. Text aimed at the public should aim for a grade level of around 8. Text above a 17 has a graduate level.

Gunning was an American businessman experienced in publishing. In 1964, Gunning reflected on how his own work was questioned. Columbia University had evaluated his articles for readability.

The results indicated that Gunning’s work was too hard to read. Observations included:

Gunning was outraged by the report. He hated the idea of applying a yardstick to writing. He wrote a ‘scathing rebuttal’. As he wrote, he surprised himself. He was weighing up each word and sentence more carefully. Gradually, he favoured simpler prose. The readability test had influenced him to focus on his reader.

Gunning then argued that writing was often too complex. Robert Gunning Associates sought to help other writers. The result was the Gunning Fog index.

How does the Gunning Fog test work?

The formula for Gunning Fog is 0.4 [(words/sentences) + 100 (complex words/words)]. Complex words are those containing three or more syllables.

Even today, the formula’s simplicity is still highly praised. The modern version is even better. Readable evaluates text as a whole. It has been modernised, improving accuracy.

When is the Gunning Fog Index most useful?

The Gunning Fog index is used to ensure clarity and simplicity. 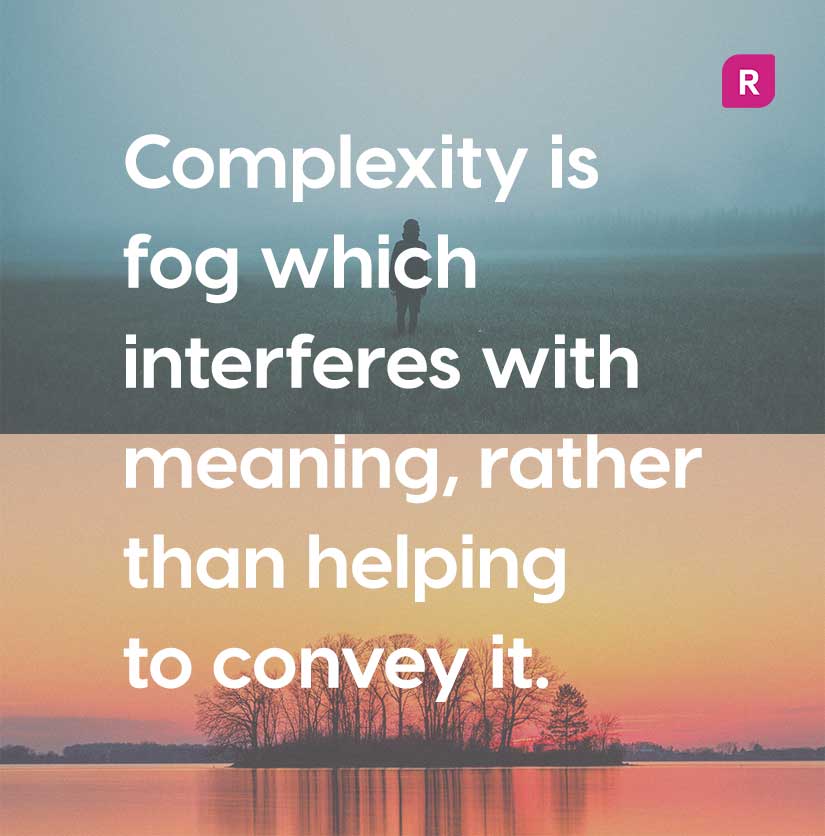 GF can help researchers write papers. For example, clarity is important for the acceptance of abstracts. Gunning Fog can help reduce their difficulty.

This may be appealing to researchers. Even more for high ranking, international medical journals.

Research examining editorial policies came up with improvements. These included writers being made aware of their use of the index. The authors describe the Gunning Fog Index as ‘easily interpreted’. They propose standards for article readability. e.g. Journal of X will only publish papers with a Gunning Index of less than 16.

They also propose visibility of the score on the first page. Were this accepted, intentional cloaking would become very obvious. This isn’t a comfortable prospect for everyone. As Gunning himself says:

“Anyone who loves words is annoyed by counting sentence length and long words.”

Indeed, complex writing is worn by some as a badge of honour. To them, it illustrates intellect. One study even reported a link between difficulty and perceptions of prestige.

Passages with a poor GF score were judged as better. However, there is evidence that people do prefer reading simpler text.

In one study, peer-reviewed journal articles and articles from throwaway journals were compared. “Throwaway” journals are free and contain no original insight.

Surprisingly, they have wide circulation and readership. The researchers found that throwaway journals were easier to read.

Peer-reviewed articles were more likely to score as difficult.