How did the Fry readability formula transform editing for writers?

From the 1960s onward, linguists were making readability formulas easier and quicker to calculate. How can the graph-based Fry formula help you improve your readability?

Fry is a formula used to calculate the US grade level required to understand a piece of text. Sounds familiar - that’s because this is the aim of most readability formulas. What makes Fry different from many is how it calculates this.

Fry is a graph-based formula. It uses sentences and syllables as variables.

Numbers which fall into the dark blue areas labeled ‘long words’ and ‘long sentences’ fall outside of the graph’s parameters and can’t be scored.

The placement on the graph was originally determined by a process of sampling excerpts from the text in question.

These two figures were then plotted onto the graph. The area where the two lines from these figures intersect was taken as the approximate reading grade level of the text.

The Fry readability formula was created by Edward Fry who published it in 1968.

Fry contributed greatly to reading and readability research. He was director of the reading center at Rutgers University and president of the National Reading Conference.

He also lent his skills to supporting literacy development in Zimbabwe and Uganda. Whilst he was teaching in Uganda, he created the Fry readability formula as a ‘formula to save time’.

He promised ‘reasonable accuracy and uncommon simplicity’ when using the graph. He clarified that accuracy is within a grade level, which is handy for educators or librarians who want to calculate reading age confidently.

He also assured that it correlates very well with other highly regarded formulas such as Dale-Chall, Flesch Reading Ease and Spache. 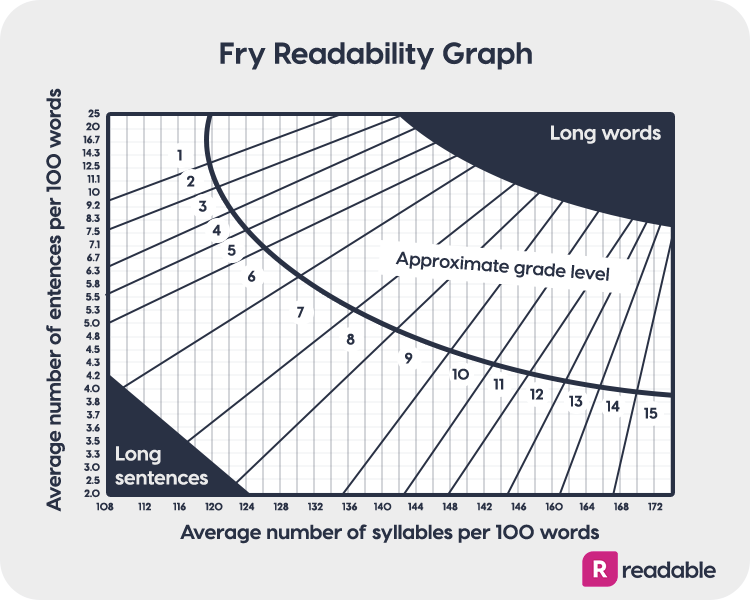 This would have been comparatively easier than other formulas of the time.

Luckily, it’s now even easier to calculate the Fry formula. We take the hassle out of your hands. ReadablePro analyzes the text as a whole and gives you your Fry score as a US grade level within seconds.

In an article about how readability formulas are used today, Fry pointed out many uses for Fry and other formulas. Among other uses, Fry can be used for:

Unsurprisingly, as Fry was passionate about reading research and development, the Fry formula is particularly useful in education. With a wide range of grading, it can be used for elementary to college level texts.

Fry is also one of several formulas used in healthcare. It can’t be overstated how important readability is in the healthcare industry to ensure a healthy population.

Clear communication is key, whether used within diagnosis or in ongoing correspondence between doctors and patients.

Studies have shown that patients who don’t understand health literature are less likely to follow instruction for their care. They may therefore not fully understand their illness and have poorer health as a result.

The Fry formula is also important in legal matters. Fry points out that the matter of readability has been pointed out in court cases. In his example, he discusses a court case regarding insurance policies.

The claimant concerned in the case got nowhere near the payout they were entitled to because of the way the insurance policy was worded.

This was of particular concern because the claimant was elderly. Legal services pointed out that just under half the elderly population of New York had a less-than-ninth-grade education.

Edward Fry himself testified that their documents were written at college level. By doing this, the insurance provider was undermining the rights of citizens to clear information.

The outcome of the case was that the insurance provider had to take ‘prompt action’ to improve the readability of their documents.

The above examples show that although readability formulas are extremely valuable in education, they don’t stop there.

Edward Fry and other readability experts paved the way for creating essential tools for writers. ReadablePro uses Fry, along with a bespoke range of other well-respected algorithms, to give you a readability rating which is easier than ever to understand.

The Fry formula can tell you the grade level your audience have to be to understand your text. This can help you to clarify your writing, helping you to be clear, concise and readable.